On the local TV news a couple of weeks ago there was an item about a little boy, a four-year-old, who was losing his battle with cancer. He came to the attention of the Make A Wish Foundation, which is an organization dedicated to helping children realize their final wish.  Most kids wish for a trip to the World Series, or a ride on a fast roller coaster, or the chance to meet Tony Romo. This little boy’s wish was more simple – he just wanted to ride the elevator in a very tall building and push the buttons for every floor. 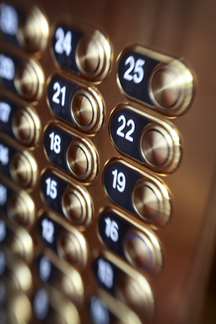 And so it was arranged.  On the appointed day, the child – in his wheelchair – and his family gathered at the elevator in a building in downtown San Antonio and climbed aboard, whereupon the boy pushed the button for the first floor.

But when the doors opened, heaven burst through. For at the first floor, and at every floor in the building, the office workers had gathered around the elevator and were clapping and cheering and waving  balloons and banners and offering cookies and toys.  The joy on the child’s face, and on that of his family, was a pearl of great price.

If Christ had been there – and I, personally, think he was – he would have said something like, “The Kingdom of God is in your midst.”

Often, when Christ talked about the Kingdom of God, it was in a situation of healing and hopefulness. A scribe came to Jesus and asked which is the greatest commandment. “Which do you say?” asked Christ. And when the scribe recited the Great Commandment – love the Lord your God with all your heart and all your soul and all your strength, and love your neighbor as yourself – Christ responded, “You are not far from the Kingdom of God” (Mark 12:34).

What does it look like, this Kingdom of God? Well, it is not about eating well and having possessions, and wielding power and influence. It is not a matter of arguing over who is right or of being puffed up by our own clever words. It is about “righteousness, peace and joy in the Spirit,” says Paul (Romans 14:17). We do not live in it by our own might or even our own good deeds.  It is not some far-off heaven where we land when we die (if we have enough points).

The Kingdom of God can’t be defined or described. But we can tell stories about it, and we can work to further it in our own day and time, and we can know it when we see it. We saw it a few weeks ago on the face of a little boy who just wanted to push the buttons on the elevator. (Original story broadcast KSAT news, Sept 27, 2012.)

We invite your comments.

Leave a reply. We would love to hear from you. Cancel reply