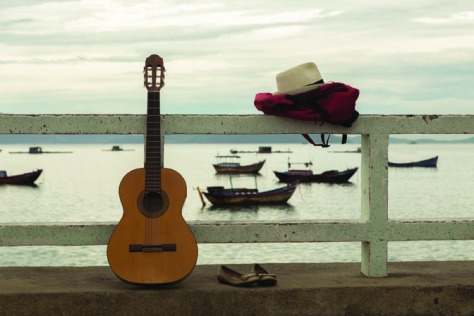 from the Spring/Summer 2017 issue of Reflections magazine.

Can one make a pilgrimage without a song? I don’t think so. At least I can’t. Somehow as a little girl I had this vision that everyone I knew was on a grand journey, and that no matter what the loss or the difficulties, it would lead to a magnificent end. I don’t remember seeing pictures about this vision. No one actually taught it to me. It came to me from singing the “glory” songs in church and around the piano at home.

What beautiful songs they were. We’d picture the “crystal sea, the evergreen shore, the pearly gates and the streets of purest gold.” Canaan’s Land, Beaulah, the Jordan River were all places vividly marked on my spiritual geography. “Over yonder,” we’d sing, and our simple places would be transformed.

There were other songs besides the “glory” songs. We had the “Sunday Morning” songs. These were definitely not traveling songs. One stood up straight in one’s finest clothes and proclaimed, “Lord God Almighty.” There were the “near” songs like “Near to the heart of God” that were supposed to be sung with hushed voices and tender feelings. Then there were the “work” songs that reminded us of the working part of our journey on earth which was to “publish glad tidings and labor on.”

All these songs were well and good, but the ones that seemed to get everyone moving and on the road were the songs about the end of the journey. There was something in the rhythm of those songs that made them everyone’s favorites. They were easy to harmonize. Although dancing was out of the question, toe tapping was not. Once one knew the first or second refrains, the song was one’s own. Anyone could join in and sing, and if one had the desire to embellish, that was not only allowed but encouraged.

My first memory of these songs was in my grandparents’ little white-framed church in Lone Pine, Texas. Although my grandfather couldn’t read a note of music, he was called forth to go to the front of the church and lead the singing. I remember being proud that he stood there with such dignity with his hymnbook in one hand and waving the other hand to the beat of the music. I’d glance at the fireflies outside in the warm summer night, and my grandmother would fan herself with the cardboard fan in the pewback that advertised the funeral home. We would sing “When we all get to heaven,” and the men with the deep voices would come in to echo “Shout the victory.” They seemed so sure of where they were going, how they would get there, and what it would be like. Who was I as a child to have any worries?

Maybe that gave me courage as a young girl to march into the nursing home and roll the oily black piano stool round and round until I could reach the piano and wait for some dear old man to say, “Honey, can you play ‘The Sweet By and By’?” This was the 1950s, and for me it was the “sweet here and now,” but I believed that this was my part in the caravan and besides, I knew the songs by heart.

Soon, like an act of liturgy, one could hear the movement of the wheelchairs and the shuffle of footsteps holding on to walkers as the old folks heard the melodies of the songs of the pilgrims’ way. I’d look around and see a crowd gathered. Some older women would nod their heads and wave their hands. Others would try harmonizing, and away we’d go.

When I went off to college, I learned that not everybody went to nursing home hymn sings nor sang in the car or around the piano. Most of my friends didn’t even have a copy of Heavenly Highways, the trusted book of pilgrim songs. “Those are the kinds of songs used by people who deny this world and only want a ‘Pie the Sky’” they’d say. “Oh,” I’d say, and put the books away in the piano bench.

The times were calling for new songs for the journey. This time the songs centered on the here and now. If there were to be a better world, then we would have to make it happen here. I was more than ready to join in. Some of the songs had the same religious fervor of the revivals at the Lone Pine Church. This time we used the guitar. There was wonderful harmony with clapping and dancing. I felt the same sense of anticipation. The only difference was that people would be together and then they would stream out in all directions. The companions on the journey varied from day to day. It also got confusing. Was Gloryland the dawning of peace and justice or was it the Age of Aquarius? People were singing the same songs but were on completely different journeys. Certainly the geography had changed. Now instead of marching to Zion, we were on the road to Marrakesh. Pilgrimage turned into an adventure with who knows what end in sight. What was important was to be on the road and to do one’s own thing.

Spiritual geography blended into actual geography. I traveled from Lone Pine to Dallas to Tokyo to Bali to Katmandu to Corinth to London and back. On the way I learned to sing in other languages and tried my hand at new instruments like the anklung and the gamelon. I began to think of the old songs as too nostalgic and the new road songs as too melancholy. As time went by, I became more and more a solitary explorer, and soon I didn’t sing much at all. I never was a good solo singer anyway.

It came as a complete surprise the day that the choir returned to sing for me. It didn’t happen in a church or around a piano or at a singing. It happened in the unlikely sanctuary of a shopping mall. I had just returned from Indonesia and was suffering from the cultural shock of materialism that strikes nearly everyone who has lived in a developing country. Was it an advertisement that sent me walking through the frenzied crowds. I don’t remember. All I can remember is the sense of alienation and loneliness that I felt as I wandered from store to store. ”Who am I?” “Where am I?” “Where do I belong?” I wanted to say to someone.

As if an answer came from “glory,” I heard the tune and the words of an old hymn we used to sing at home. “This world is not my home, I’m just a passing through.” I began to smile. Where did that come from I wondered. Before I knew it, the second and the third stanzas had come to me. My step became lighter. “The saints on every hand are shouting victory.” I could feel their presence as they seemed to say, “These things don’t mean anything to you. You’re part of our traveling band. You know who you are.” I left the Highland Shopping Mall with a new sense of freedom.

Today I have a beautiful grand piano in my living room. I use it a lot for singing. I sing by myself, and sometimes I invite others over to sing with me. I wouldn’t say that those songs of the evergreen shore are the only songs I sing. I have found other songs that express my path on the pilgrimage now. Songs that somehow express the desire to be here and over yonder at the same time. I will, however, be eternally grateful for that early vision of the journey and the companions who graced the way. I am grateful that I can bring out those words in my moments of loss and darkness. In singing the glory songs I can celebrate my loved ones, both known and unknown, both here and over yonder. You can be assured that I now have several copies of Heavenly Highways. In fact, there is a tattered copy on my piano right now.

Sylvia Maddox is a writer and educator. She is a member of Church of Reconciliation, San Antonio TX.  Reach her at
sylmaddox@aol.com.

In the Beatitudes (Matt 5:10), Christ says “Blessed are those who are persecuted for righteousness’ sake, for theirs is the kingdom of heaven.” What does persecution for the sake of the Kingdom look like in your life?

What are the stages of your faith journey?

Back to Table of Contents, Spring/Summer 2017 issue of Reflections magazine.